BWS were appointed to provide a Multi disciplinary service on a £3.0m food factory developed by Spanish Producer P.A.S.A. at Brovary, Ukraine. The factory is the first of its kind in Ukraine as part of P.A.S.A.’s expansion programme throughout the former Soviet Union. Construction commenced on site in autumn 1998 and the on completion the facility produced stock cubes. This provided many opportunities for the ‘Chicken Kiev’ play on words!

BWS had previously set up in Ukraine in 1993 to work on a number of Western embassies and worked closely with the State Committee for Urban Construction and Architecture to draw up a manual and organise a conference to guide clients and contractors on working practices in the former Soviet republic. Building Magazine’s 4 August 1995 Market Analysis reported on our success. 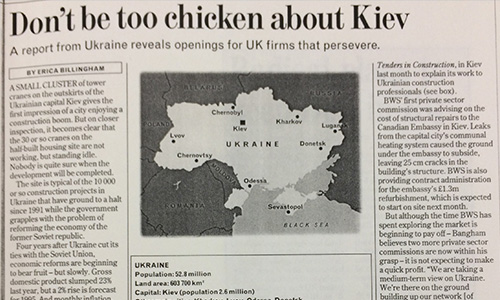